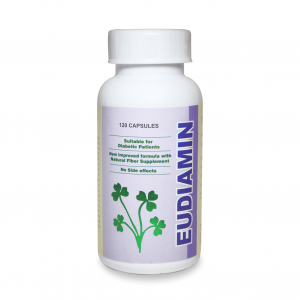 Eudiamin Capsule ₹750.00
Back to products

Hypersensitivity to any ingredient of thepreparation.

Use only if clearly needed and under medical advicxe only. Try to avoid simultaneous use of the product/s having similar compostions to avoid side effects. This product is not a substitute to other scientific and medical treatments of male infertility.

One capsule twice-a-day or as directed by the Physician

Chlorophytum borivilianum is a health-promoting herb, which attenuates the endocrine system, the ‘conductors’ of the entire orchestra of physiological process of the body. Its effect cascade throughout the body owing to its rich Balya- provide energy to each cell, Rasayana- act inside the human body by modulating the neuro-endocrine systems and Vrishya gunas to endow the user with enduring vitality, immunity, youthfulness, cognitive ability, conjugal capability and an improved state of homeostasis. Chlorophytum borivilianum supports the physiological balance or homeostasis. It improves an access to energy stores, help to improve stamina, resistance to stress, tiredness, help in mobilization of the body’s nutritional resources, help to normalize various indices such as blood pressure, blood glucose and improve function. Although their action is primarily, supportive and restorative, but it treats male sexual inadequacies like oligospermia, lack of libido, impotency etc.

It helps to overcome erectile impotence by relaxing the smooth muscles of corpora cavernosa, the erectile tissue whereby more blood can be pumped into it. It is used to remove from the body any obstructions caused by a cold nature, for lack of sexual arousal in males and females and ease pain in the lower back, which might be kidney related, as well as pain in the joints caused by buildup of waste products.

Ashwagandha is used to calm the mind, relieve weakness and nervous exhaustion, build sexual energy and promote healthy sleep. The herb is termed a rasayana. in Ayurvedic practice, which means it acts as a tonic for vitality and longevity. It is also classified as an adaptogen. Research on Ashwagandha has concluded that extracts of the plant has a direct spermatogenic influence on the seminiferous tubules of immature rats presumably by exerting a testosterone-like effect.

Purified Shilajit, an Ayurvedic rasayana, was evaluated in healthy volunteers of age between 45 and 55 years for its effect on male androgenic hormone viz. testosterone in a randomised, double-blind, placebo-controlled clinical study at a dose of 250 mg twice a day. Treatment with Shilajit for consecutive 90 days revealed that it has significantly (P < 0.05) increased total testosterone, free testosterone and dehydroepiandrosterone (DHEAS) compared with placebo. Gonadotropic hormones (LH and FSH) levels were well maintained.

Oral administration of the extract of nutmeg at the dose of 500 mg/kg produced significant and constant increase in the sexual power of normal male rats without any noticeable adverse effects indicates that the 50% ethanolic extract possesses aphrodisiac activity, increasing both potency and libido, which could be attributed to its nervine stimulating property. The study provides a scientific rationale and justification for the traditional use of nutmeg in the management of male sexual disorders.

The aqueous extract of Orchis latifolia rich in FOS’s as well as phytosterols were evaluated for their efficacy against streptozotocin and alloxan induced sexual dysfunction. The behavioral analysis of rats was undertaken to observe the effect on mount, ejaculation and intromission latencies as well as frequencies, hesitation time and copulatory rate. It was observed that hyperglycemia has an adverse effect on overall sexual behavior. The deleterious effect was significantly reduced in animals treated with polysaccharide rich fraction of O. latifolia. The study suggests that the diabetes induced sexual disability may be ameliorated by proper usage of herbal drugs.

The aphrodisiac activities of Crocus sativus stigma aqueous extract and its constituents, safranal and crocin, were evaluated in male rats. The aqueous extract (80, 160 and 320 mg/kg bw), crocin (100, 200 and 400 mg/kg bw), safranal (0.1, 0.2 and 0.4 ml/kg), sildenafil (60 mg/kg bw, as a positive control) and saline were administered intraperitoneally to male rats. Mounting frequency (MF), intromission frequency (IF), erection frequency (EF), mount latency (ML), intromission latency (IL) and ejaculation latency (EL) were evaluated. Crocin, at all doses, and the extract, especially at doses 160 and 320mg/kg body wt., increased MF, IF and EF behaviors and reduced EL, IL and ML parameters.

The administration of 75 mg/kg/day cinnamon significantly increased the sperm population, motility and viability, which supports the theory that in mammalians, cinnamon has a beneficial effect on spermatogenesis.

In one experimental study, cinnamomum bark oil (CBO) has improvement effect on testicular oxidant- antioxidant balance and sperm quality, and its consumption may be useful for asthenozoospermic men.

Several studies have shown that the clove bud not only can be used to treat sexual disorders in males, but it also affects the functional physiology of the male reproductive system such as causing an increase in the testosterone level, motility of sperms and the secretory activities of the epididymis and seminal vesicle in lower doses.

Kudzu rejuvenates the male reproductive system and increases both quality and quantity of semen that increase its count and mobility. The herb reduces vata and normalizes kapha, which increases shukradhatu. This shukradhatu helps in increasing hard erections, libido and sexual energy.

Studies have suggested that Gokshura can enhance the hormone levels to within a normal range. It can increase the testosterone by increasing the luteinizing hormone and the gonadotropin-releasing hormone. This hormone is effective in building muscles as well as improving fertility and libido, and it has also been proved to be active in stimulating spermatogenesis and sertoli cell activity in rats.

Liquorice root improves sperm count as well as semen viscosity like curculigo orchiodies. Additionally minimizes the inflammation and irritation of the urethra which can be consequence of coitus. Liquorice root also heals promptly any minor injuries which may have occurred during forceful intercourse. Liquorice root also possesses a cooling and demulcent effect on the genitourinary system which helps in the after orgasm phase.

Zingiber Officinale have a beneficial effect on male reproductive functions in rats. These data are confirmed by our observation on the increased sperm counts, motility, testosterone, and decrease malonhydialdehyde levels. The significant increase in the absolute weight of the testis and epididymis could therefore be due to increased androgen biosynthesis as evidenced by a significant increase in serum testosterone levels in the experimental rats. Androgens have been shown to be necessary for the development, growth and normal functioning of the testes and male accessory reproductive glands and studies have shown that the level is positively correlated with the weight of testis,

It has a good role in respiratory system as it helps in expelling extra amount of mucus in the respiratory tract. It improves the condition of throat. In increases the urine output. It also works as aphrodisiac agent when given in calculated amount. Amount of sweat also increases by it. It also works as antipyretic agent hence it decreases the aggravated body temperature.

Shatavari can serve as a powerful male tonic. With a bittersweet taste, this herb renders cooling and purifying effect to the liver and blood, and targets pitta at its main site in the small intestine. Its cooling properties balance the heating herbs which are used to improve sperm count, such as, garlic, onion, ashwagandha, etc. Thus, Shatavari prevents depletion of sperm caused by burning via excess pitta. Owing to its heavy and nourishing properties, it is useful for vata, especially when combined with heating vajikaranas like ashwagandha or bala.

Bala refers to ‘strength’ in Sanskrit, and being a rejuvenative tonic herb for vata and pitta, this herb finds application in nourishment and strengthening of all the bodily tissues, especially the muscle, plasma, muscle, bone marrow and reproductive tissue. It serves as a tonic to restore sexual strength, promote spermatogenesis and enhance male fertility. This herb can be taken internally or even used as massaging oil in combination with Ashwagandha onto penis to improve its tone and also to prevent premature ejaculation. Its combination with herbs such as gokshura, ashwagandha, vidarikandha, saw palmetto, and kapikacchu, proved to be beneficial for prostate health.

The health benefits of Makhana (Euryale Ferox Salisb-seeds, Fox Nuts) are attributed to its antioxidant, aphrodisiac, spermatogenic, and antihyperglycemic properties. It improves physical strength, increases stamina, and helps to manage diabetes and other diseases. In Ayurvedic Medicine, it is considered as a procreative agent, which means it also helps with begetting child. Generally, it increases sperm count and improves quality of spermatozoa. So, it also helps to treat oligospermia and impaired spermatogenesis.

There are no reviews yet.

close
close
Start typing to see products you are looking for.